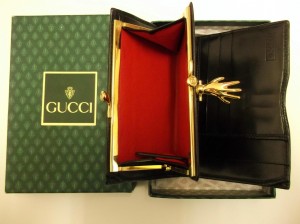 Still boxed and unused this is a classic vintage design from Gucci. This  1960s-70s black patent ladies  wallet has a red interior and a gold hand clasp.  This has a small change compartment with gold embossed kiss clasp.

Working in the Savoy hotel London Guccio Gucci was influenced by the high end luggage that he saw to opening a small luggage store in the early 1920s. He began creating items in  his native Florence  using the skills of craftsman and Tuscan artisans.

The iconic product range expanded over the years to include clothing, accessories, eyewear, ties and footwear. The double G logo was introduced in 1964 and throughout  the 60s the company brand name became synonymous with “chic”.

In the 80s the company moved out of the hands of the family and has had a number of management changes. From 2006 Frida Gianni became the latest  creative director of the Italian fashion house.